Toad in the Hole Recipe that’s Tasty and Simple 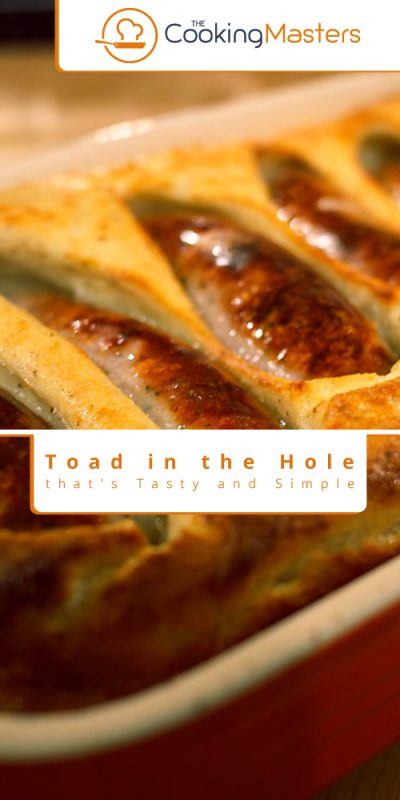 Toad in the hole

Toad in the hole is a traditional English meal consisting of sausages cooked in Yorkshire pudding dough. Generally, this food is served with thick vegetables and onion broth. The origin of the name “Toad-in-the-hole” often creates disputes. Many stated that the unusual name was given because this food resembled a frog (toad) which was poking its head from inside the hole. But there are also rumors that this food was once called a “Frog-in-the-Hole”, although there is very little evidence to support the theory. Other names that are also used, but less popular are frog sausages (sausage toad).

The appearance of this toad in the hole dish is indeed unique and makes the curiosity peak, plus the recipe and the process that is very easy to make pumping enthusiasm to finally try to practice it. As for the taste, this food is almost like a rather thick pancake, soft texture, and soft with a savory flavor. Frankly, if for some people this food becomes mild if eaten just like that, you can replace gravy (thick broth) with bottled chili sauce. Well, some people really prefer when the food is spicier, right?

A little tip for you, if the sausage is cooked and the oil is hot, remove it from the oven and immediately pour the mixture while the oil is very hot until the mixture hisses and looks boiling. Put the baking pan and sausage back into the oven, bake for 25-30 minutes, until the edges look brown. That way, the sausage will be more cooked to the inside.

People usually this dish as a snack food for a delayed procrastinator. Sometimes this food is eaten in the afternoon as a complement to drinking a cup of tea. Well, if you want to make it at home, there is no need to prepare troublesome ingredients because this dish is easy to make and simple. Well, for those of you who want to try other breakfast variants at home, maybe this traditional English breakfast (that is one classy way to say it rather than toad in the hole, to be honest) can be an option.

Delicious Sloppy Joes Recipe for Any Occasions at Home