Chicken Vegetable Soup Benefits When You’re not Feeling too Well 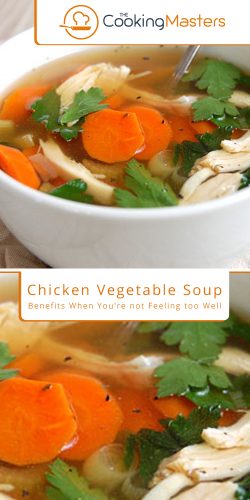 Who doesn’t love a hearty and delicious chicken vegetable soup? It is fibrous high because it contains vegetables and chicken meat at the same time. Not to mention, there are numerous nutrition and vitamins that would be so good for the bodies. That is why this soup has always been a recommendation for those who are not feeling so well. This soup can be a powerful weapon to fight light diseases such as influenza and fever. Other than that, it is easy and quick to fix. Very suitable for people who want to eat healthily but only has a short free time. So, let’s just jump right into the recipe!

In order to make the chicken vegetable soup cooking process a lot easier, be sure to prepare all the ingredients and the cooking utensils around the table. This would save you from extra disturbance you don’t want. When you’re fully prepared, follow these instructions carefully!

As mentioned before, chicken vegetable soup is good for increasing the body’s immune system. There are a lot of benefits that comes just by consuming them, especially when someone is not feeling too well with their body. First of all, consuming this soup will heat up the body, thus curing the disease slowly. Just remember to eat it while it still hot to get the maximum nutrients from the soup.

The next benefit of this soup is it reduces any inflammation and infection. According to research, one serving of hot soup can hamper the flowing of white corpuscle that causes flu. It also fights infection in the nose and throat properly when someone is ill. Furthermore, the steam flowing from hot soup can relieve the throat and smoothen the breathing. No wonder why the chicken vegetable soup has become almost anyone’s favorite soup all around the world.